Skill #24 How to Create the Life You Want, One Small Change at a Time

In this section we’re going to talk about how to create the life you want. But before we do that, let’s talk about the big picture of how to create change. The tiny choices we make over and over create our character, influence our mood, and determine our quality of life. When those choices involve emotion processing and values-based action, they lead to an overall change in our emotions, usually by how we respond to them. This is a process that takes a little time and consistent effort, and in the long run it’s easier and works better than an endless struggle with emotions.

One evening, an elderly Cherokee brave told his grandson about a battle that goes on inside people.

He said, “My son, there are two wolves inside of my heart. They fight each other terribly, each trying to destroy the other. One wolf is evil. It is anger, envy, hatred, self-pity, arrogance, greed, selfishness, resentment, lies, superiority, inferiority, and ego.

The young grandson looked nervous. He thought about it for a minute and then asked his grandfather “Which wolf will win?”

The old Cherokee simply replied “The one that I feed.”

I wanted to start this course off with some things you could act upon right away, so in the previous episodes we talked about how to soothe the body, how to identify unhelpful thinking, how to practice willingness with emotions, and so much more.

If you didn’t already know, this post is part 23 from my 30-part course on how to process your emotions. The full course is available to purchase ad-free, with a workbook, downloads, extra videos, and resources. Click here to buy How to Process your Emotions.

Welcome to section four. So here’s the two main ideas from this 30-part course:

1. We Create Happiness Through a Gradual, Choice-Based Approach

The tiny choices we make over and over create our character, influence our mood, and determine our quality of life. When those choices involve emotion processing and values-based action, they lead to an overall change in our emotions, usually by how we respond to them.

It is a process that takes a little time and consistent effort and that in the long run is easier and works better than an endless struggle with emotions.

You can create real, huge change in your life by changing 1% every day.

How to Create the Life you Want

I once read the story (I can’t remember where; I wish I could credit the author) of a man whose doctor sent him to therapy because his health was at risk, but he didn’t seem willing to change anything. He was discouraged about life.

He was in his 40’s, overweight, had developed diabetes from a poor diet, hated his job, and was single. And, to make things worse, his diabetes was affecting his vision; he was losing the ability to see, even with glasses.

So he starts seeing a therapist, and he tells her all his problems. And as she listens, she realizes that he really does have an overwhelming situation. He didn’t really have any social support, he was poor, his mother had recently passed away, and for him, the prospect of changing just didn’t seem worth it.

The only thing that relieved his pain a little was the momentary joy of a hamburger, fries, and a Coke. The thought of exercising or changing his diet seemed too hard. Trying to get a new job seemed too overwhelming because he’d have to go back to school to get a new certificate.

As the therapist gently tried to convince him to change, he just said “Why bother? It’ll never work.”

So she decided to just let him come in every week and listen to him, care about him, and just encourage him to make one tiny change. The one thing she suggested he do was to just switch out Coke for Diet Coke.

He didn’t like this idea; Diet Coke doesn’t taste as good. He figured that with all the other crap he ate, it wouldn’t make much difference to drink Diet instead. He complained about it to her every week, but he did it. He started to buy Diet Coke instead of Coke. And he did this for a few weeks, and then he got used to it and it wasn’t such a big deal.

A few months later the therapist was driving and saw an exercise bike on the side of the road for free. She picked it up and found that it worked. It wasn’t the fanciest, but it worked. So she brought it to work with her for her next session with this client.

She encouraged him to ride the bike for two minutes each day while he watched a show. He griped and complained, but he put the bike in his car and went home. The next week he told her that he had set it up where he watched TV and had tried it a few times.

At this point he had been in therapy for months. He had talked about his grief and his frustrations at work and his hopes and his dreams and his sadness, and in that environment, he was slowly working through his emotions and getting a little support.  And he was starting to feel just a tiny bit better, like his emotions didn’t drag him down so much. He was still depressed, but not so bad, and he had longer moments of happiness.

One week he came back to therapy and told his therapist that something exciting had happened. He confessed that he would ride his exercise bike for a whole 30 minutes while watching a show, and he realized that his vision was improving. His blood sugar levels were going down and his eyesight was getting better. His diabetes was improving.

For the first time, he actually felt a glimmer of hope that his life really could get better.

Now he was ready to start making a few more changes. He would try to change one thing per month — eat a few more veggies, get out of the house a little more, reach out to an old friend, take a class to learn something new.

And little by little, he started getting healthier, he started feeling more energy, he was excited about an upcoming outing with friends, he was getting ready to apply to a new job. It took over a year of tiny changes, but his life was really turning around, and this was all because he started with just one small thing — switching from Coke to Diet Coke.

In the previous sections you’ve learned 22 skills to change your life. You don’t have to do them all; don’t allow yourself to get overwhelmed. Making one small change can make a huge difference to your life over time.

2. We Develop the Ability to Make Better Choices Through Careful Emotional Processing

Now, in this section we’re going to talk even more about how to put your life on the path that goes in the direction of happiness. Happiness is most likely to be achieved through focusing on values, character, and integrity rather than by focusing on happiness or emotions.

Most of us want to be kind and successful and to have close friends and a happy family. But most of us do dumb stuff when we get emotional: we blow up in anger or get overwhelmed with despair or get burned out by stress.

[Activity: Write about a time you acted contrary to your values because you felt flustered, rushed, or very emotional.]

But in order to really choose the path we want to be on, to create that ability to choose, we have to slow things down and be intentional.

Victor Frankl was a Jewish doctor who survived Auschwitz during World War II. He came out of that experience believing that “between stimulus and response there is a space. In that space is our power to choose our response. In our response lies our growth and our freedom.” 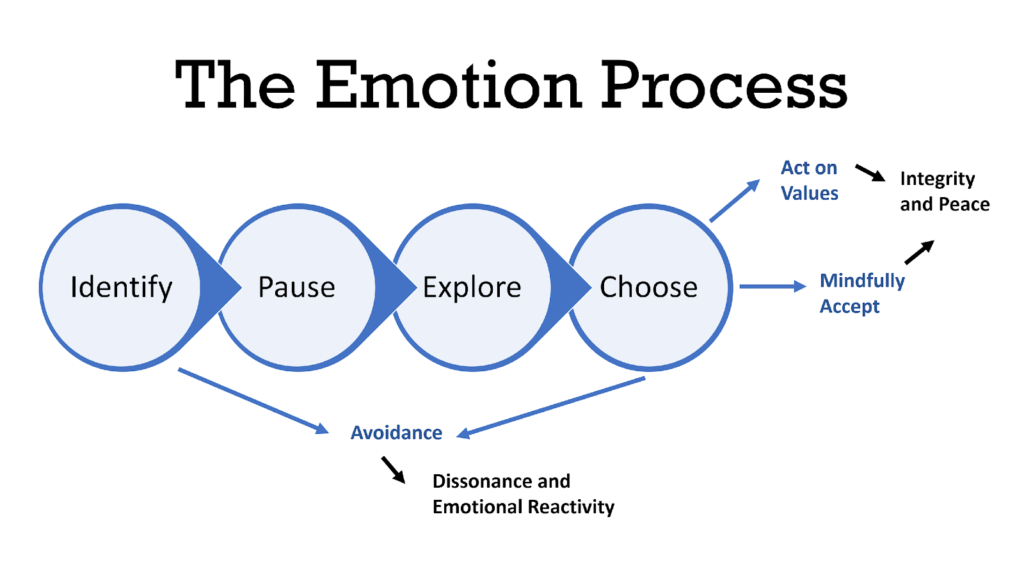 Lengthening that space gives you more and more power to choose by expanding your awareness and options. It gives you more options to be flexible and creative in your problem solving. This develops emotional strength and resilience. This is the difference between being reactive and intentional.

Let me give you an example.

Once I was working with the father of a 14-year-old girl who was acting out in dangerous ways. She was staying up till three in the morning with friends, using illegal drugs, vaping at school, and failing her classes — and she was pretty manipulative with her parents. They tried to talk with her and convince her to stop, but she didn’t really listen to them and kept doing whatever she wanted.

When I asked him why he wouldn’t hold boundaries with her, he said he just didn’t want the contention. When we dove deeper, he explained that he had a very contentious mother who would scream and yell and argue with his dad and the kids. And as he talked about this I could see his body tightening — he was getting anxious just remembering the fighting in his home growing up.

He didn’t realize it, but in order to avoid that unprocessed feeling of fear and anxiety, he was avoiding setting boundaries in the home. When we worked through those feelings of fear, he became better at managing contention and allowing his daughter to be mad if he held a boundary. Because he wasn’t automatically avoiding that emotion, he was able to be a better parent.

On a side note, we later found out that one of the reasons the daughter was acting out so much is that she had been sexually assaulted, but it happened one night when she had snuck out, so she didn’t tell her parents about it because she thought it was her fault. Then she felt like she was a bad person and started hanging out with the wrong crowd and doing drugs because that was how she avoided her feelings of shame and trauma.

Both the father’s and daughter’s behaviors were due to reactively avoiding suppressed emotions.

For us to choose the life we want, we need to learn how to be less reactive to our emotions.

In this course we have talked about many ways to slow things down: dropping the struggle with emotions; mindfully accepting emotions; calming the body and the nervous system in a bottom-up approach; resolving destructive thinking patterns; and learning to notice our thoughts, separate ourselves from them, challenge them, and choose which thoughts to act on.

Each of these emotion processing tools can help you slow things down, breathe, and stretch out that space between stimulus and response. That’s why emotion processing is such a powerful tool in helping you live the life you want.

The next seven videos are about how to create the life you want, how to know what you value the most, how to create lasting and sustainable change, how to let go of your self-labels, how to develop a growth mindset, and how trying to feel happy actually backfires and what you can do instead.

PrevPreviousSkill #23 Self-Deception: The Problem of Not Knowing You Have a Problem
NextHow to Journal for Anxiety and DepressionNext

Therapist Answers “Do You Cry in Session?”

Sometimes I get asked “Do you cry in session with your clients” and “Is crying good for you?” In this post I answer these questions

In this post you’re going to learn how to tell if you have a growth or a fixed mindset, how to develop a growth mindset

Skill #27 Get Rid of Self-Limiting Beliefs

In this post you’re going to learn how to let go of self-limiting beliefs, how to stop labeling yourself, how to stop getting stuck hating

Skill #26 Fight Depression and Anxiety with Your Core Values